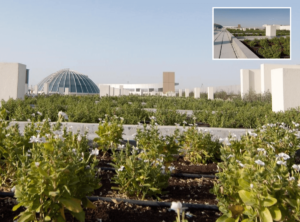 In response to rapid urbanization fueled by an unprecedented population growth, in 2004 we were invited by the government of Dubai to design a series of what was to become 11 community based social infrastructure projects delivered in 7 years across the emirate. Committed to delivering 21st Century public services, in modern, open, and inviting environments, to bring public services into the heart of its’ growing neighbourhoods, and accessible to all.

From our growing research and understanding of traditional desert urbanism we were already committed to incorporating contextually contemporary solutions that address climatic responsive design and passive sustainable design principles into everything that we do. And, always with a fabric first approach, amongst many other proposals utilising both green and blue technologies, we looked to incorporate the benefits of a Green-Roof Construction, irrigated by the buildings own grey-water supply, into our design. 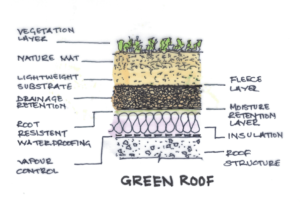 Green roofs can dramatically lower the transfer of heat by conduction and convection into the interior spaces of the building, reducing the internal temperatures that the building cooling systems need to offset to create a more comfortable internal environment for building occupants within the arid desert environment of Dubai. Reducing the costs of cooling the building compared with non-green roofed building types. Such measures have also been empirically shown to absorb carbon dioxide and reduce the levels of ground-level ozone, which in-turn, cleans and filters out pollutants, improving air quality. A real concern for areas that are being impacted by the urbanization of the desert landscape. 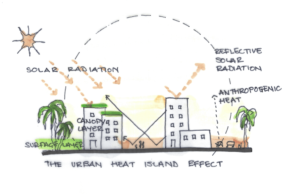 The UHI effect occurs when urbanisation replaces natural land cover with dense concentrations of pavement, buildings, and other surfaces that absorb and retain heat. This heat is then reflected into the atmosphere, exasperating the content of the heated air “blanket” that has built up over the past century and which now acts to trap the Green House Gases(GHG) that are building up in the atmosphere and are responsible for the Climate Change (CC) which we are now all aware of and are attempting to combat.

The UHI effect is seen most evidently at night-time in Dubai, where temperatures across the city can be 2°C higher than in the surrounding desert. This effect increases building energy costs (e.g., for air conditioning), air pollution levels, and heat-related illness and mortality. Whilst, UHI mitigation measures help reduce heat emissions, reduce energy demand for the increased cooling of internal spaces to better achieve comfort levels in hot and arid climates, and cool the natural environment externally. Latterly, as research has developed, increased ozone concentrations have been detected upon completion of newly installed green-roofs, this is determined to be caused by an increase in runoff of total nitrogen, and is known as nitrogen leak, a condition where surplus nitrogen is emitted due to excessive fertilisation induced by the compost of the soil blend. This will decline and a more balanced and stable nitrogen concentration level will be achieved naturally.

For architects and urbanists, the composition of artificial surface introduced into any design is very important in the formation of the UHI as the urban morphology is responsible for lowering the porosity of the city and limiting air flow through it.

Green roofs and vegetation can help reduce UHI effects by shading building surfaces, they are a passive cooling technique with a higher albedo effect than conventional roofs that deflects and stops incoming solar radiation from reaching the building structure below and releasing moisture into the atmosphere.

The unique microclimate of cities is the product of their complex, built environment, their extent or lack of cooling vegetative surfaces, and their increased anthropogenic activity. Each cities DNA varies, dependant on the extent of these components. These combine to create a thermal contrast between urbanised and non-urbanised areas. Thus, the control of micro-climate conditions in cities is vital for the energy efficiency, reductions of emissions as well as the health and comfort for the citizens.

Today, due to the impacts of climate change and the importance of ecology and sustainability, the responsibility to act with full understanding of effects that urbanisation brings to our natural environment is paramount to all professionals working in the built environment. Much less was understood in 2007 when tangram delivered the Dubai governments’ first ever “green-roofed” building, and a much wider appreciation of these mitigation techniques is know acknowledged. 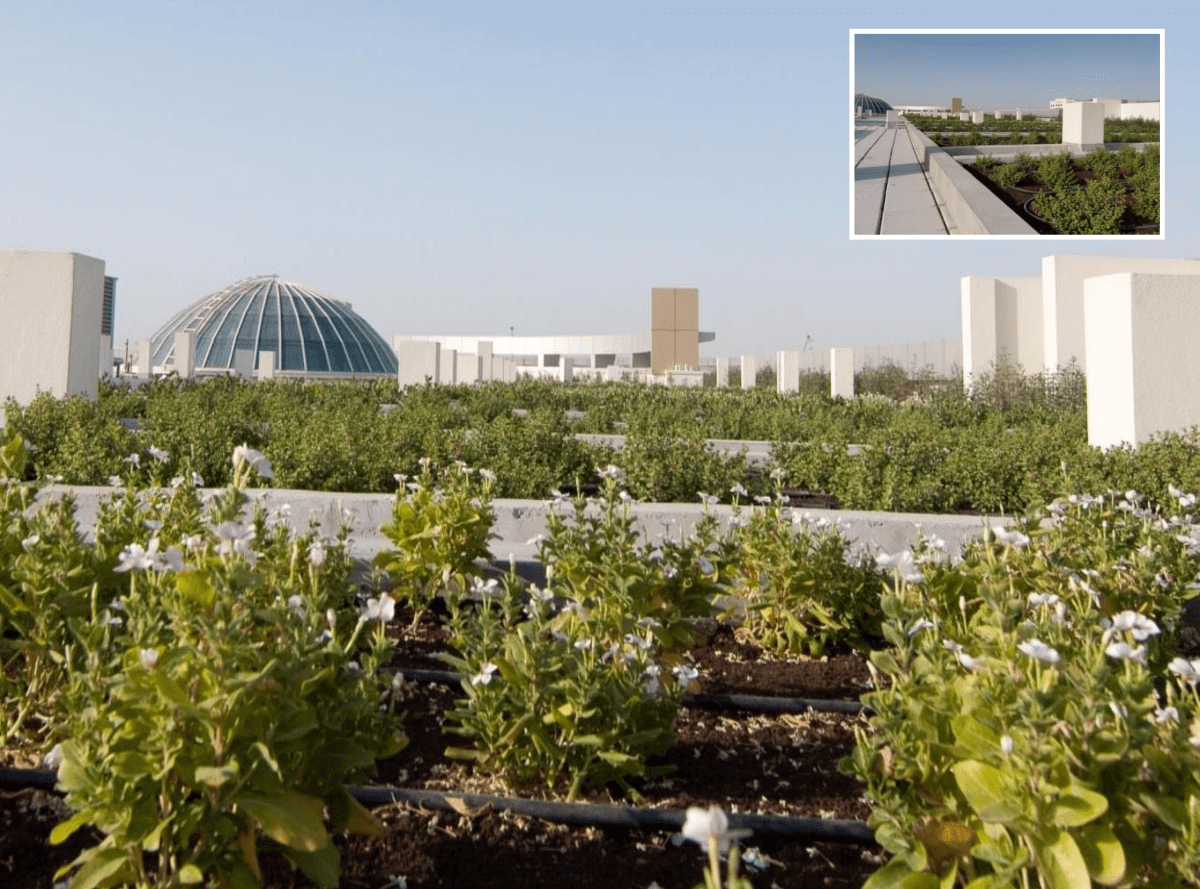 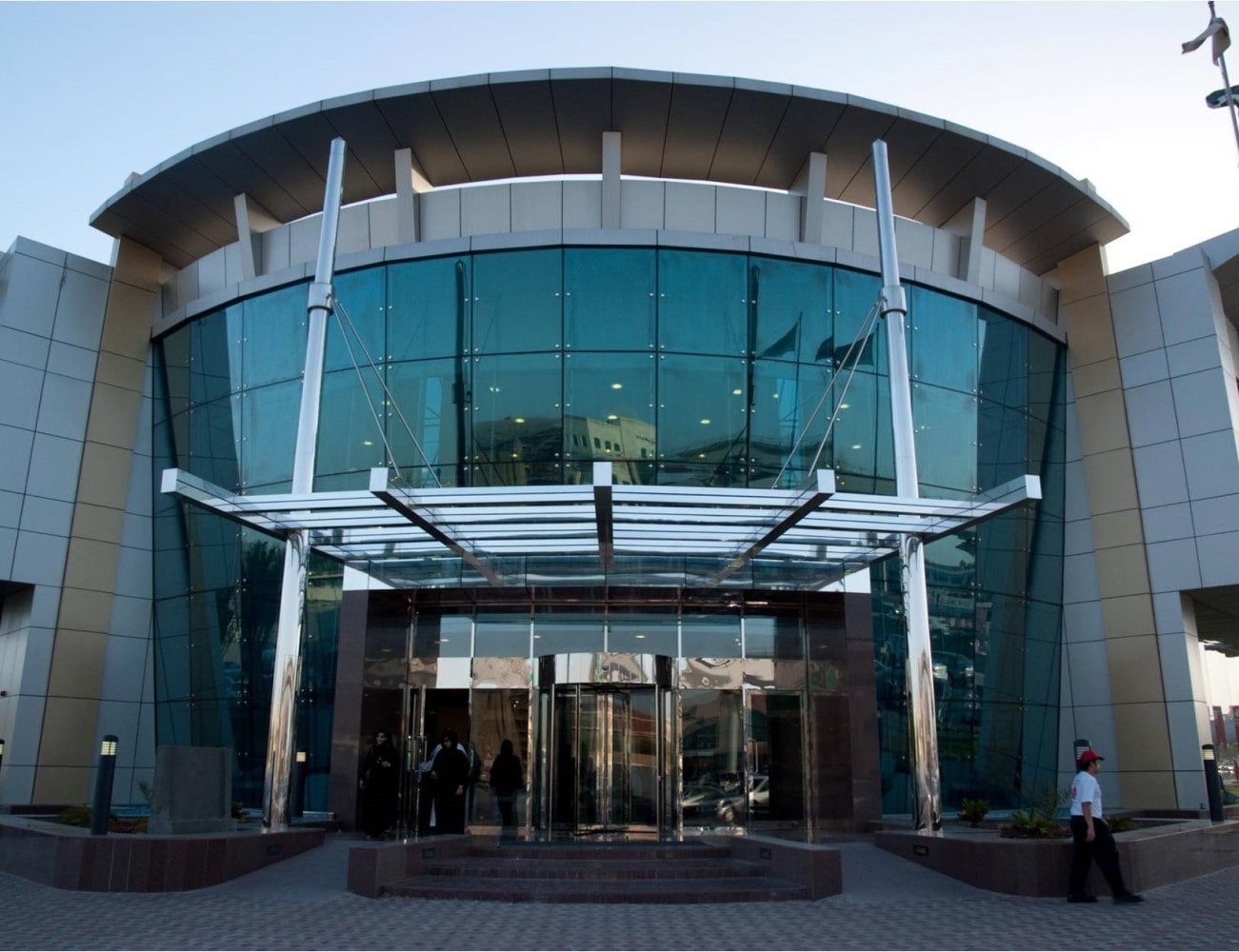 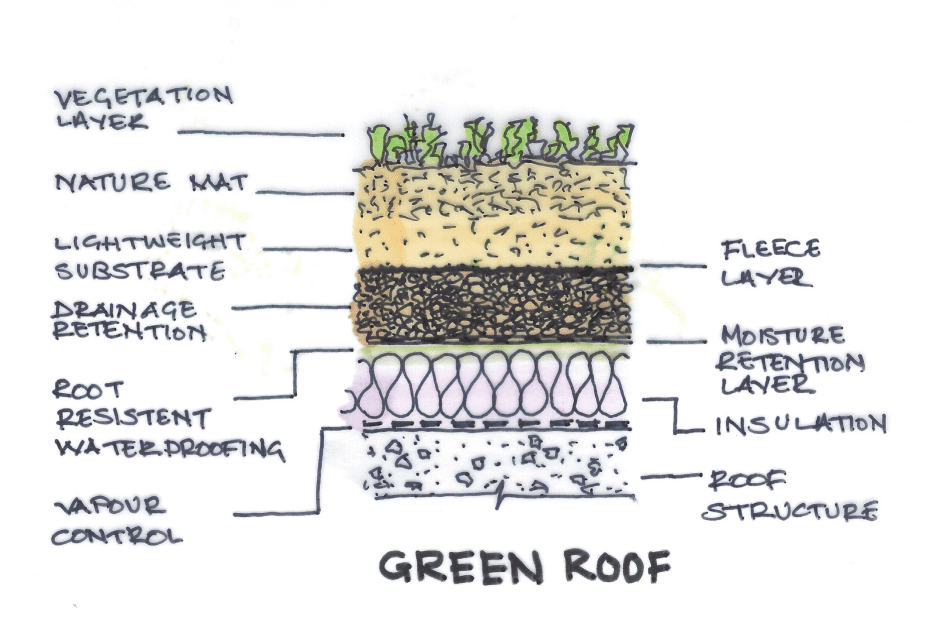 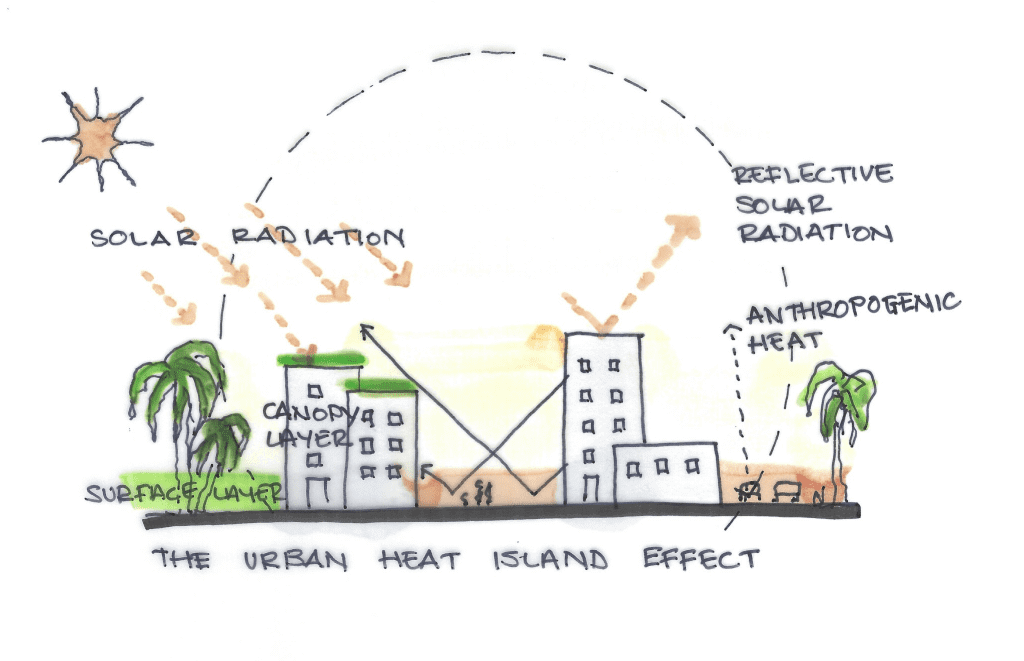 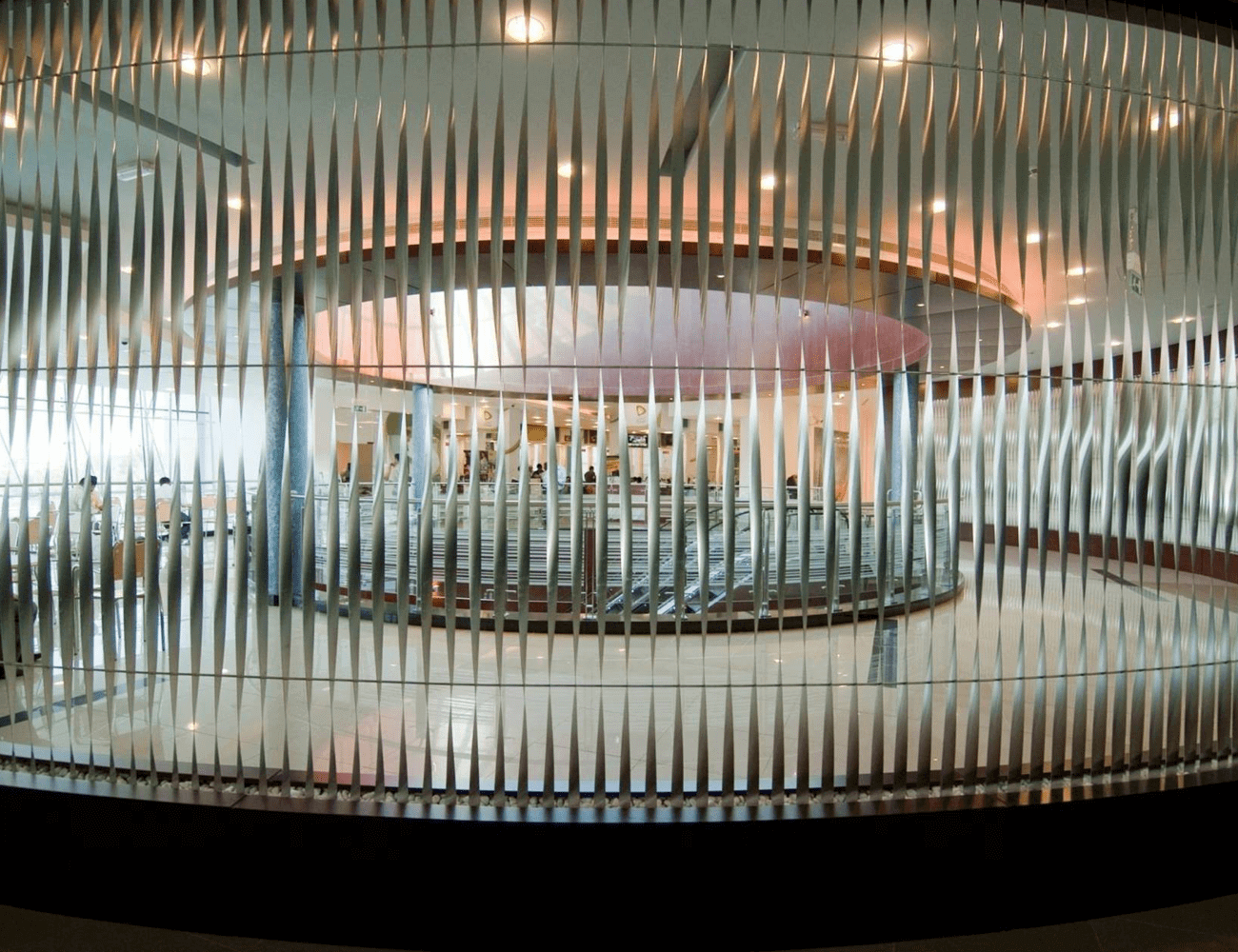 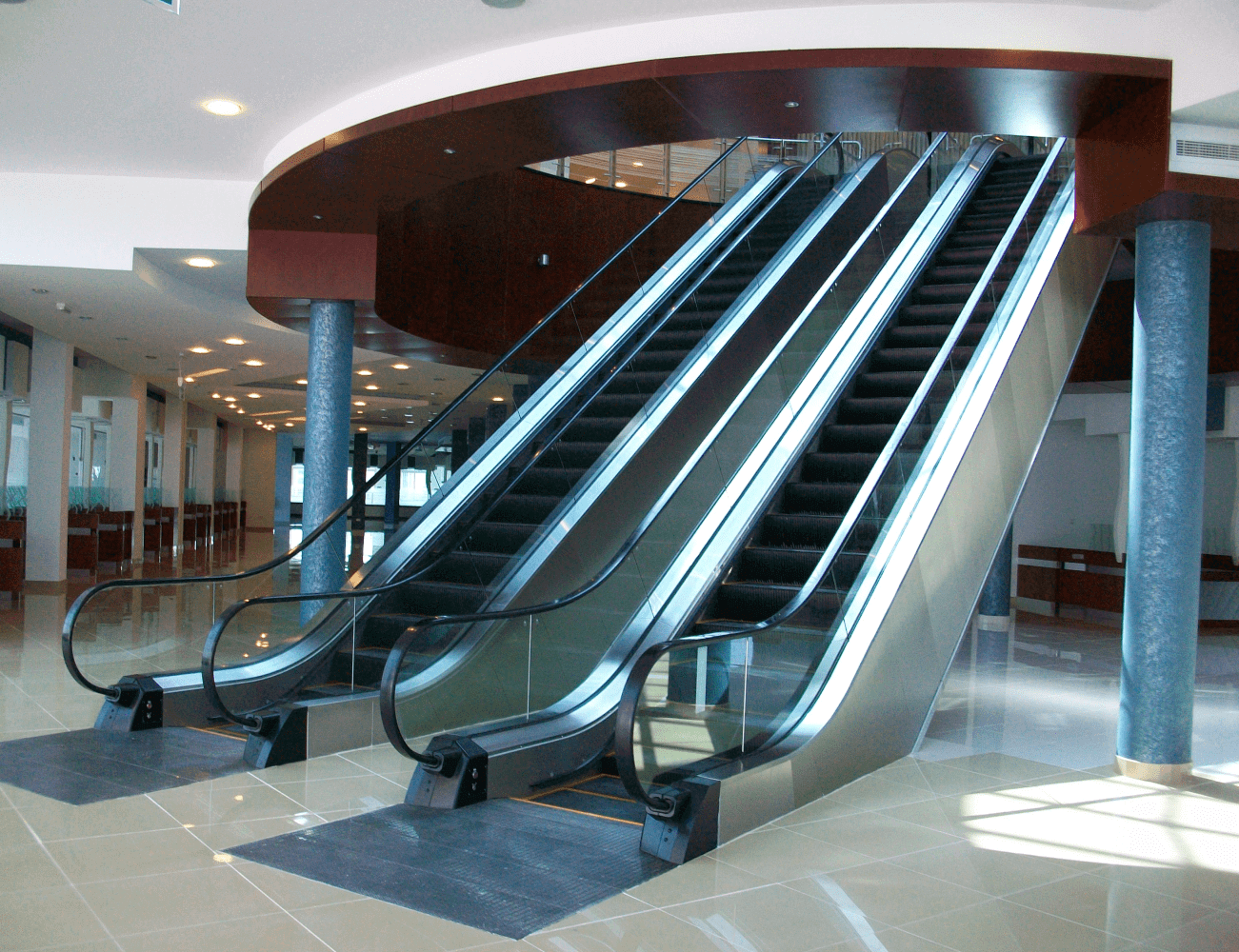 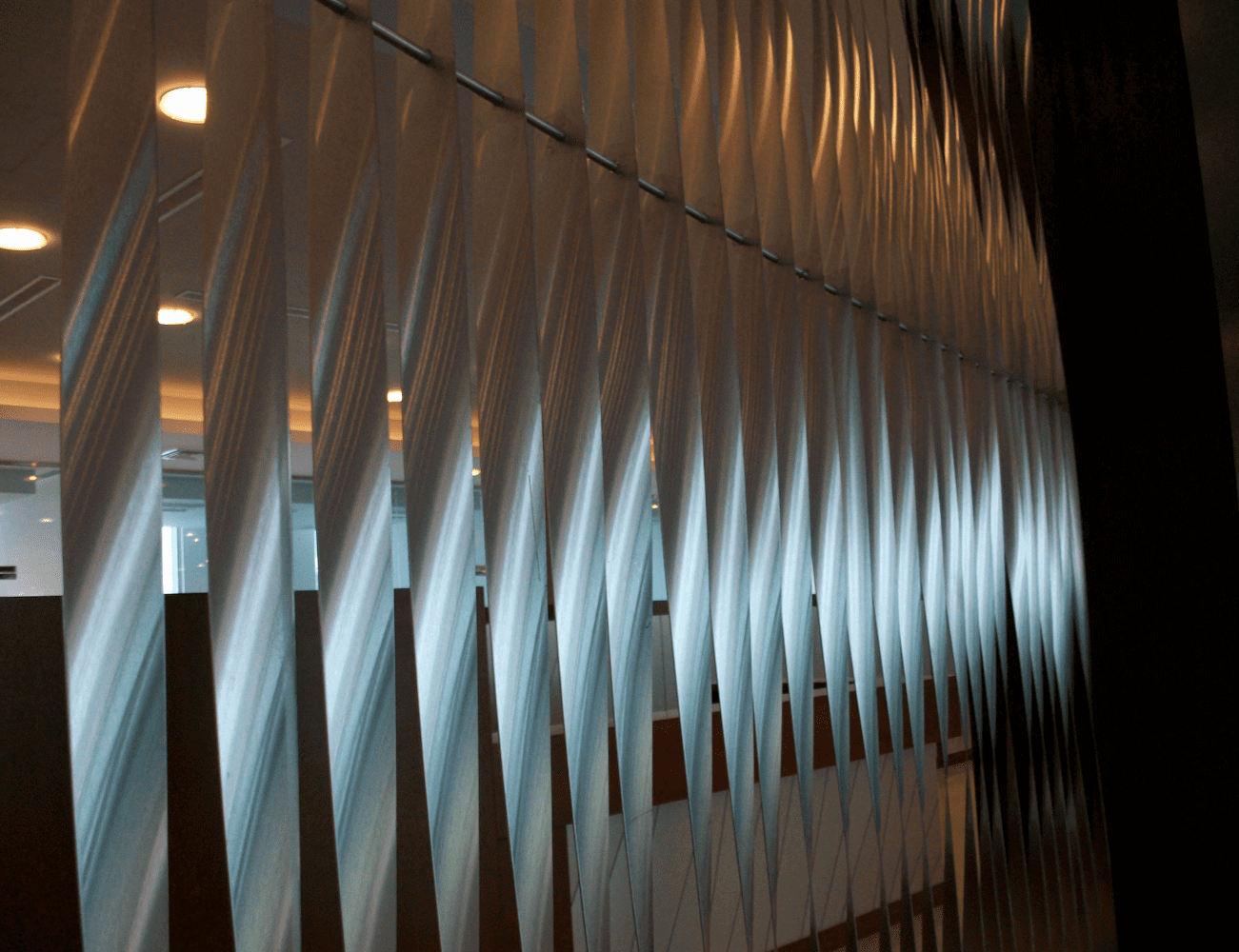 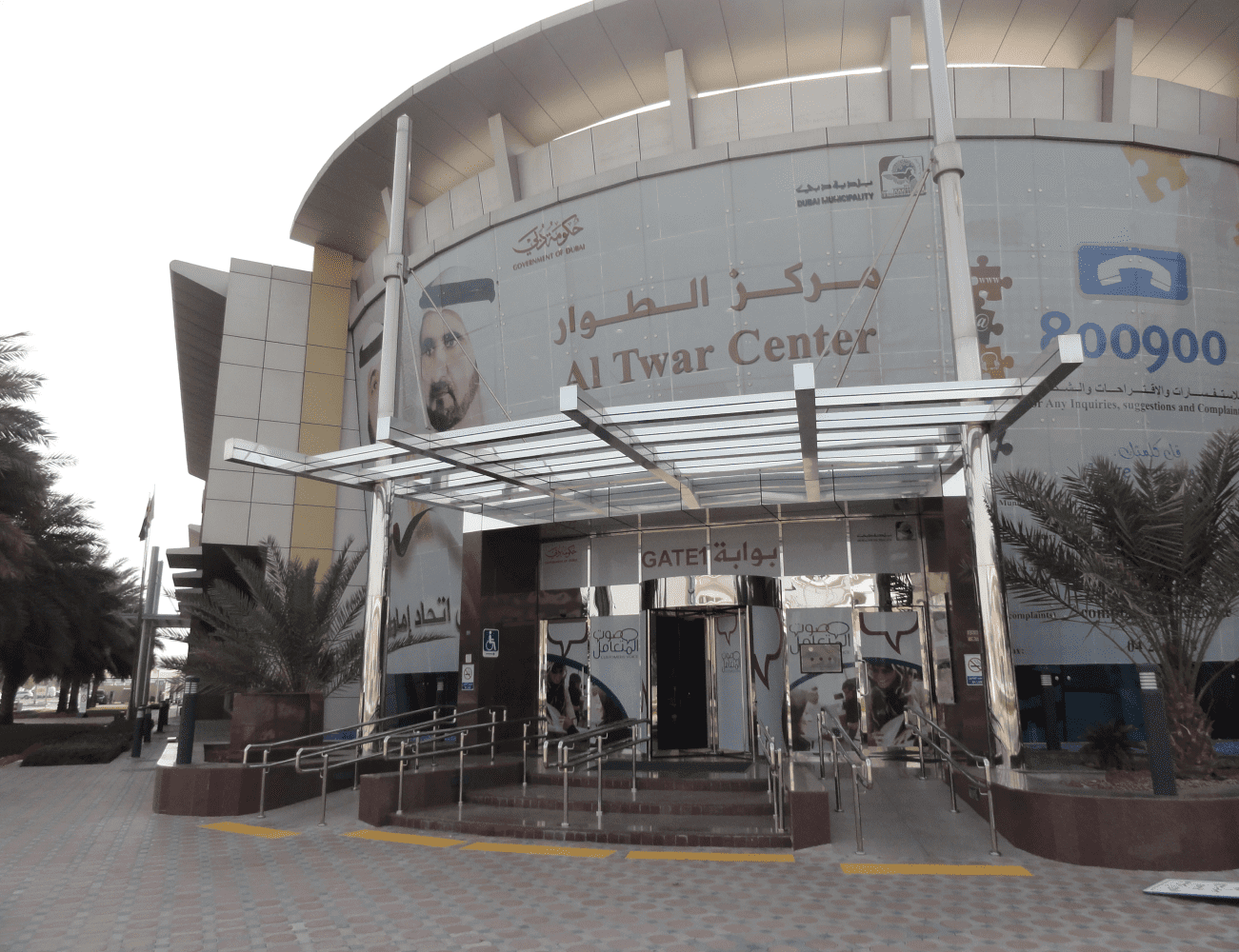